Chef Tom Colicchio's Favorite Patron? His Pup Piper!
This article is from AOL PEOPLE AND PETS


When Top Chef judge Tom Colicchio brings home white anchovies from his New York City restaurant Colicchio & Sons, he doesn't share them with his wife or sons, but with his flat-coated retriever, Piper. "Tom spoils her the worst," his wife Lori Silverbush tells PEOPLEPets.com. "She's our baby girl!"

The 16-month-old pup definitely enjoys living the high life, thanks to her famous family and the love they share. "She is zany, goofy, incredibly people-oriented," says Silverbush. "If she could, she would be playing 23 out of every 24 hours."

Piper came into the family's life as a puppy. "When we decided to get a dog, I didn't want to get a lab since there are so many out there," Colicchio says. "I called the flat-coated retriever society — I remembered seeing the breed up in Rhode Island — and the president told me there was a guy in Goshen, N.Y., who'd just bred his champion." Colicchio contacted the breeder, who emailed him photos of the litter — and he instantly fell in love. "Lori took a trip out to meet her, and said 'She's the one.' "

Though the couple just welcomed son Luka in August and together help raise Colicchio's son Dante, 16, from a previous relationship, Piper fits perfectly into the family. "She sleeps between Tom and I when we let her, and hogs the blankets," Silverbush says. But it's Dante who's her favorite, says Silverbush. "Whenever she hears his name she looks at his room." The baby, however, is a bit more of a challenge. "She loves him to pieces, but thinks he's a notch lower in the pack than she is," she laughs.

That's not to say the beloved pooch isn't above any normal doggie antics. Last year, she had a one-sided fight with Silverbush's Blackberry, leaving the phone as a "mere remnant of its former self," she recalls. "The next day my best friend called me and said, 'You called me accidentally last night and all I could hear was some grunting and heavy breathing. I hung up really fast.' We got a laugh out of that!"

But despite any quirks, Piper is always there to bring out the best in her family members. "When it's just me, Dante, Luka and Piper at home, Tom blossoms," gushes Silverbush. "He turns into a mushy teddy bear."

Now, momma. We need to talk. Serious talk. I read this article and thought... Mhh Does Chef Colicchio make Piper feel guilty for sharing the white anchovies? Does he act like momma when we want some of that good ventresca tuna? Does he give Piper the tiniest bites... stingy bites?
Does he hoard the stracchino or does he share? The article says he shares the boquerones, the white anchovies. I bet that means more than a taste. And you know how you put those nice fat pizza croutons in the panzanella? Well I think Chef Colicco would share those as well with Piper. But then again, maybe he loves more more that you love me? I am not asking you to feed me everything you eat. Lord knows, some of what you eat is... vile. [nuts, raisins, chocolate... onions, ...deadly even!] But, when you crack open a 2 lb can of boquerones, sharing a few should not be an issue. Look everyone is doing it! And they are great for us! I like mine with a tiny bit of balsamic reduction on English muffin bread- toasted.. ok? Oh. When you are rolling 25 lbs of pancetta, does it ever come into your head that maybe, just maybe we would like a tiny bit added to our dinner??? I mean woman... it's not like you don't have enough! All I am asking, on behalf of myself and JD and the Wendy... is that you act a little more like Chef Coliccchio.

Hm? Aunt Robin? So why do you have to tell her? And who died and made her food police?
Tell her to talk to Chef Colicchio first. Blah blah... excuses...

Do you want to be known as stingy momma??? 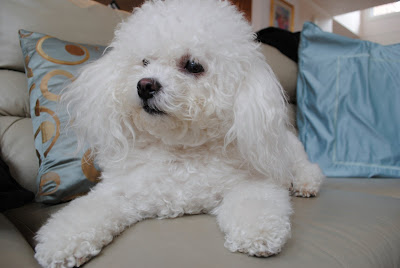 Totally agree with you 'vie!!! No STINGY Mamas!!! Hugs from Chloe and LadyBug

Aha another supporter! How do you feel?

Hey I'm right with you on this one!!!! Rocky