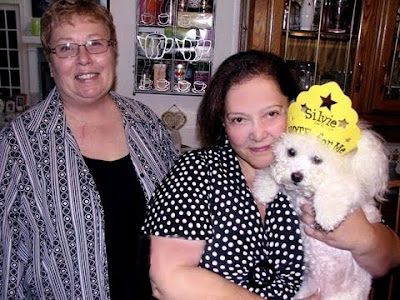 Silvie Goldstein poses with her beloved dog, who is also named Silvie.

A vote for Silvie is a vote for rescue

Silvie Goldstein says she’s never been a stage mom — but her dog’s blog and entry in the “America’s Cutest Dog” competition beg to differ.

“Silvie is gifted in that the camera adores her,” says Goldstein, referring to her female Bichon Frise also named Silvie. “Silvie sees a flash, she poses.”

Goldstein, who lives in Chesapeake, already had two Bichons when the Tidewater Bichon Frise Rescue, based in the Whaleyville area, called her about Silvie. A Labrador rescue in the area had seen Silvie listed on Craigslist as breeding stock — at only 6 months old. That rescue group bought her and turned her over to the Bichon Frise group.

Goldstein plans to repay the Bichon Frise rescue. If Silvie wins the America’s Cutest Dog competition, she has pledged the entire grand prize — $1 million — to the rescue.

The competition is sponsored by a new dog food company, All American Pet Brands, to draw attention to their product. Goldstein decided to enter Silvie to help raise money for the Tidewater Bichon Frise Rescue.

“I recognize the amount of work that goes into rescue,” Goldstein said. She frequently bakes sweets of all kinds to sell at fund raising events.

A blog that went to the dogs

Silvie the dog also goes by the name “Silvieon4,” as in “on four legs.” Silvie the human is “Silvieon2.”

The dog’s blog, www.SilvieOn4.com, is written from her point of view, Goldstein said. “It’s her voice.”

Goldstein initially started the blog to draw attention to the need for rescue of Bichon Frises. The breed is generally considered an elitist breed because of its expensive maintenance, need for high-quality food and inability to be left alone for long hours.

“The purpose of the blog is to educate people,” Goldstein said. “I have a lot of people that say to me, ‘Oh get real, this breed would never need to get rescued.’”

Bichon Frises, however, are frequently abused by their owners, bred irresponsibly or simply abandoned by people who did not realize the amount of upkeep required.

“The idea of a blog evolved,” Goldstein said. “I’m a retired lawyer. I’m not a writer. But the truth of the matter is, people do write back, she does have a following. She’s able to say things to people that I couldn’t get away with.”

Motivation for the contest

“I initially was reluctant to enter a contest,” Goldstein said. “I was never a stage mom.”

However, once she realized she could win a lot of money for the Tidewater Bichon Frise Rescue, she posed Silvie, seated on a leopard-print dog bed and wearing a tiara, and snapped her picture.

She also was motivated to enter the contest to try to change people’s perceptions about dog rescues in Virginia — in particular by one experience while traveling in Las Vegas this year.

When one person whom she was seated near found out she was from Virginia, the person responded, “Oh, that’s the Michael Vick state,” Goldstein said.

“My feet clinched,” she said. “I didn’t know that was possible. I have encountered that a couple of times. That’s the image Virginia has.”

People also told her she wouldn’t get enough votes for Silvie in the contest because “people still have dogfights there,” she said.

“I think we do a lot more than that,” Goldstein said. “I don’t want to live in a state that’s known for that and that alone. That compelled me to go ahead and do this. I want the rest of the world to know we have active rescue going on here.”

To move ahead in the contest of about 60,000 dogs, dogs must collect the most votes in a given week to be named a weekly winner. Only two weeks are left, after which 12 dogs will move on to the next phase.

Members of the public can vote — once per dog, per person, per day — at www.cutestdogcompetition.com. Weekly winners receive $500, and move on to the next stage of the competition. The dozen dogs then are voted on once again by the public to choose the top four finalists. A panel of judges then will choose the grand prize winner. The three runner up finalists will each receive $5,000.

Silvie has placed as high as No. 7 in past weeks, but can’t seem to break through to the No. 1 spot.

What to do with the money?

Robin Gray, one of the leaders of the Tidewater Bichon Frise Rescue, couldn’t imagine how much good the organization could do with $1 million.

“We often have to turn dogs away because we don’t have enough room at White Dog Cottage,” Gray said. “Money is always an issue.”

In addition, many rescued dogs need expensive medical treatment to heal injuries from years of abuse, poor breeding choices and medical conditions, such as bladder stones, that run in the breed.

“We are very fortunate that we have some of the best veterinary care in America, but it’s not cheap,” Gray said. Each month, Gray buys about 45 pounds of dog food to feed the 15-20 dogs at the rescue.

The organization does all manner of fundraising, from selling Christmas ornaments and entertainment coupon booklets to bake sales and soliciting donations. But it never seems to be enough, Gray says — the puppy mills up and down the East Coast seem to be breeding faster than the organizations can rescue.

Voting in the contest is a painless way of supporting rescue, Gray said.

“If they know about this, maybe we could get their support,” she said.

To vote for Silvie, visit www.SilvieOn4.com, and click the link at the top of the page.

I just voted :) I started voting after the Mutt Strut, and will continue to do so throughout the contest. I also posted your SNH story on my facebook page to encourage others to vote. Good luck Silvie!!