Bulldog or Bichon: Can a Little Dog DNA Solve the Mystery? - WSJ.com

Advances in DNA testing have changed the way we pursue criminals, verify paternity and date medieval manuscripts. Now it's being used to answer one of the greatest riddles mankind has ever faced: What kind of dog is that?

A new pack of genetics companies say they can tell mutt owners which breeds their dogs come from, for a fee of $60 to $125. The results, say the companies, can satisfy simple curiosity, provide clues to a dog's behavioral quirks, and even help identify breed-specific health problems.

But can a few strands of DNA really hold the answer to your dog's inner being? 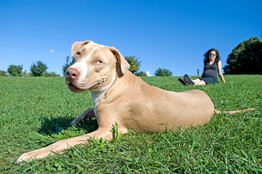 What kind of dog is that? Parrot, who may be made up of Italian greyhound terrier, Boston terrier, bichon frise, golden retriever, mastiff, West Highland white terrier, Staffordshire terrier and/or bull terrier, according to various dog-DNA tests, plays in a Brooklyn, N.Y., park. To find out, we subjected our lovable, squeezable and all too agreeable mutt named Parrot to DNA tests offered by four companies. He happily sat still while we swabbed the inside of his cheek, and he didn't bristle when we took him for a blood draw at the veterinarian for one of the tests. In the end, he learned nothing (except maybe that swabs equal treats), but we learned that the business of dog DNA isn't as simple as it appears—starting with the fact that all four labs came back with different results.

The first lab we tried was DDC Veterinary in Fairfield, Ohio. The parent company has long focused on human DNA testing, mostly performing paternity tests, including, says the company, the one for Anna Nicole Smith's daughter. With that pedigree, we expected DDC to give us solid proof of Parrot's lineage, too.

The online buying process was easy. We paid $68 and received our swab kit in a few days. We sent the swabs back in the self-addressed, stamped envelope provided, and in a couple weeks, got our results. An official-looking certificate with a gold seal listed six breeds, grouped by the level of strength of each, on a scale of one to five: Italian greyhound and Boston terrier (level three); bichon frise and golden retriever (level four); mastiff and West Highland white terrier (level five). Also included was a list of each breed's behavioral traits and common health problems, and an explanation of what the levels mean. A level one, for example, indicated that the breed contributed to more than 75% of the dog's DNA, down to less than 10% for a level five. 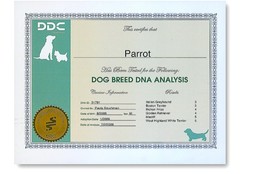 It all made sense, except for one thing: Parrot looks like none of those breeds. What he looks like is a pit bull, mixed with who-knows-what. At the shelter where we adopted him, he was listed as part pit bull, part weimaraner. Others have said he resembles a pointer or a Labrador retriever. He weighs 65 pounds, and measures more than two feet tall and three-and-a-half feet long. He's a big dude.

In its material, DDC has the caveat: "DNA is inherited randomly from each parent which makes every dog unique. This is why a dog's appearance may look different than the breeds detected in the DNA test."

This is true, according to animal geneticists we spoke with. But the plot thickened when we got the results from Mars Veterinary's Wisdom Panel DNA test. A division of candy and pet-food giant Mars Inc., Mars Vet goes a step further than its rivals by requiring a blood sample, which meant paying our vet $20 to draw blood. The test was already the most expensive in the bunch, at $124.99. The company says blood has more DNA on it than a cluster of cheek cells.

All the companies we used, including Mars, had easy-to-navigate Web sites. In each case, our kits arrived within days, complete with self-addressed stamped return packages and clear instructions. All sent the results back two to three weeks later. In the case of Mars, our vet offered to pop the return envelope in the mail.

But what differentiates Mars, as we came to learn, is the number of breeds in its database: 157. In contrast, DDC has 63. Among the breeds Mars has that DDC and others don't is the American Staffordshire terrier, also known by some dog experts as the American pit bull terrier—the dog we thought Parrot most resembled. Mars's test showed that at least 25% of Parrot's DNA came from the Staffordshire terrier, meaning one of his grandparents might have been a purebred. At least 12.5% came from the bull terrier, which comes from the same ancestral group, and a trace came from the wire fox terrier. None of the breeds detected by DDC were found.

And therein lies the limits of dog DNA testing. Still a relatively new field, canine genetics is an inexact science. To locate the genetic markers that might differentiate a breed—markers that control for size, for example -- companies take samples from purebreds with established pedigrees. Depending on how common the breed, they might sample anywhere from a handful of dogs to hundreds. Mars's chief geneticist, Neale Fretwell, estimates it costs a minimum of $20,000 to get a new breed into the database.

But geneticists say the DNA of dogs even within a given breed can vary widely depending on the country they are from. In addition, breeds within the same group -- such as terrier -- can be very similar genetically. Also, a single dog has billions of bases, building blocks of the genome, and these DNA labs only look at a few hundred. What's more, there are thought to be as many as 400 dog breeds world-wide -- roughly 160 of which are recognized by the American Kennel Club -- and it would be impossible to know for sure that a breed has a unique genetic sequence unless every one of the breeds was analyzed.

Breeds that show up as contributing to a large part of your dog's DNA are likely to "accurately reflect a dog's composition," says Urs Giger, a clinical geneticist at the University of Pennsylvania School of Veterinary Medicine. But of the breeds that come back in amounts of less than 10%, he says, "you can't be sure" that your dog's makeup actually contains that breed.

Mars's Mr. Fretwell says the company samples dogs from around the world and is constantly updating its database. He says extensive tests were done to find the markers that would most reliably predict a dog's breed: "We haven't yet found a breed that's indistinguishable from another breed."

Randy Smith, account manager at DDC Vet, says the list of breeds it screens for includes the most-common ones, but adds dog owners should check the list before buying the service, in case the breeds they suspect their dog has isn't on it.

DDC doesn't do the tests at its lab. It works with BioPet Vet Lab, of Knoxville, Tenn. We also got a kit directly from BioPet, for $59.95, which came back with virtually the same results, leaving out only mastiff. When we called BioPet to ask about the discrepancy with DDC and the other companies, we spoke with Meg Retinger, the company's chief administrative officer. Ms. Retinger said the 63 breeds in its database cover about 92% of the DNA present in mixed-breed dogs in the U.S. "Our objective was to provide good coverage at a reasonable price," she said.

When the lab scanned Parrot's DNA, said Ms. Retinger, no one breed emerged as dominant, so the software looked for the closest matches. The fact that it came back with Boston terrier was telling, she said, since that breed is in the same family as the American Staffordshire terrier, which is not in the database. She said the lab is working hard to add the Amstaff and is collecting samples from breeders. Customers can request that their dog's DNA be retested free of charge whenever the lab adds a new breed. Customers can check the company's Web site for breed updates.

Our final test was conducted by MetaMorphix, a biotech firm that does genetic testing of livestock and parentage testing for the AKC. Its Canine Heritage Breed Test is built on 10,000 samples from 108 breeds. "Waiting for your dog's DNA test results can rival the anticipation of a new baby," according to the Web site, from which we purchased our kit for $99.95.

Here again, our results were different: Staffordshire bull terrier was ranked as "secondary," meaning it has a "strong influence" on our dog, but "makes up less than the majority" of his DNA. The breed is related to the Amstaff, which MetaMorphix doesn't have in its database, so at least we knew it was a likely contributor to Parrot's DNA. What the company does offer, though, is a certificate that comes with a photo of our cutie pie, which we're now proudly displaying on our cubicle wall.

Still, nearly $400 later, when people on the street pass us and ask what kind of dog Parrot is, our answer hasn't changed: "Who knows?"