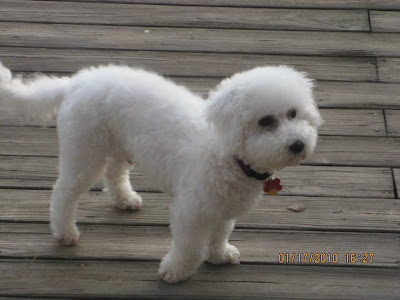 Lots of care, therapy and encouragement have changed Will and he has overcome so much. His progress has been astounding. Let me quote Auntie Robin:

"Poorly bred by a backyard breeder, two year old Will is a special needs dog. His hips are deformed; he has mild dry eye and pin point cataracts. He was purchased by a military couple with a 5 yr old child. The wife was being deployed, the husband was having surgery and they felt they couldn’t take proper care of Will. In addition to his poor start in life, his former owners kept him in a crate all day. His deformed hips coupled with very weak back legs, (due to the lack of exercise as he was growing), made it impossible for him to run, or walk up or down steps. In addition he has neurological damage, which makes him a slow learner, there are many things that most dogs instinctively know that Will doesn't and will have to learn. Since he has been in rescue, he has learned to negotiate small backyard steps, and he now runs like the wind. Will chases other dogs and even does the Bichon Buzz! However, a doggie door defeats him. He has learned to lick. At first, when the food got low in the bottom of the bowl, he would bite all over the bowl -- he now knows how to lick the bowl. He has learned to take a treat from a hand, and he now knows how to accept petting under his chin, on his cheeks and head. Each baby step is to be celebrated! Our new adopter had a Bichon very similar to Will. They feel they can give him the love, care and security he needs."


The one thing Will never needed help with was loving. He is a lovable, sweet, gentle boy. Now he is going to be part of a loving family with his new momma and daddy. What a wonderful Christmas present for all!

On a side note... Will's new family must be pretty dang special because auntie Robin has been specially careful about Will's placement. [That's code for unbelievable picky...which is hard to envision considering that she is the fussiest " screener" for her TBFR placements...] Nuff... said.

For now celebrating the moment. Will, see you at the Bash, bring your two leggeds!!!

This just made my whole YEAR! So, so happy for this special boy!!!

Dear Silvie, mama and I are very happy to hear about Will. We are so glad to hear that your Auntie Robin was able to find xactly the right people for Will! Mama got all musshy when she read this story and keeps giving me bear (um, maybe doggie) hugs and telling me how much she loves me. Having your very own people is a GOOD thing. Rocky

This is wonderful news and a perfect present for anyone who works with rescue dogs. Whoo hoo for Will! My foster brother went to his forever home this weekend--so whoo hoo for him too!