dusting off my luggage

A new 32,000-square-foot hotel with private luxury suites, a salon, spa and even limousine transportation is set to open in an exclusive part of Los Angeles next month and they have just one rule: no humans allowed. 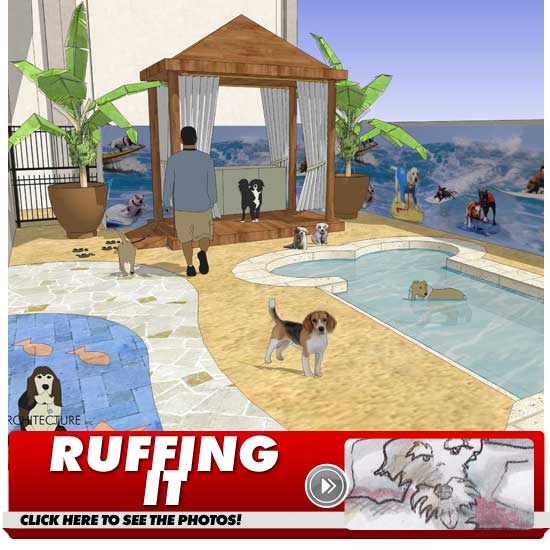 The Barkley (get it?) is getting ready to open its doors in Westlake VIllage on October 25 and they are planning a giant grand opening with an A-list celebrity pet guest list. They are planning on doing their own version of Grauman's Chinese Theater and having famous pets put their paw prints in the cement outside the hotel.

We're told so far invitations have been extended to the pets of celebs like: Britney Spears, Paris Hilton, Jennifer Aniston, Rihanna, Nicole Richie and more.

No word yet on who will actually show.

hmmmph, I just tried to send a comment and got blown off by the computer. That's TWO strikes today folks!

I was commenting on my lack of an invitation from these people. Have you received YOUR invitation, Silvie??? Mama says it's okay that I didn't get an invitation though as LA is so "over". Hmmm, gotta go get the horse heads ready for a rental later this afternoon.

'vie! How super cool! I think we should just invite ourselves!!! Let's get our luggage together and just show up at the door!! There is NO way they could turn us down....you, Wendy, JD, and US! We would be fabulous....then we could blog about it and get our entire stay there FREE! What an idea!! We need to PLAN!!! xoxo Chloe and LadyBug

How cool! It's about time. And if the opening is for celebrity dogs, surely you're invited, right Silvie? You're the most famous Bichon I know--and you can't have a good party without one of US there!

Invitation? Guys these people are in the business of renting . Invites are for "working" dogs putting in appearances to drum up business. I do find it somewhat hypocritical of them to seek out dogs of celebrities as oppposed to celebrity dogs, but then like momma likes to say... Follow da mula, l'argent, cash..... And no, I don't have an invitation.
But I do have access to momma's dirty paper.
September 10, 2010 8:11 AM

Thanks for sharing.
Now that's MY style!

PS Hi to JD and Wendy.
Have a nice weekend, y'all!