QC is a full time job 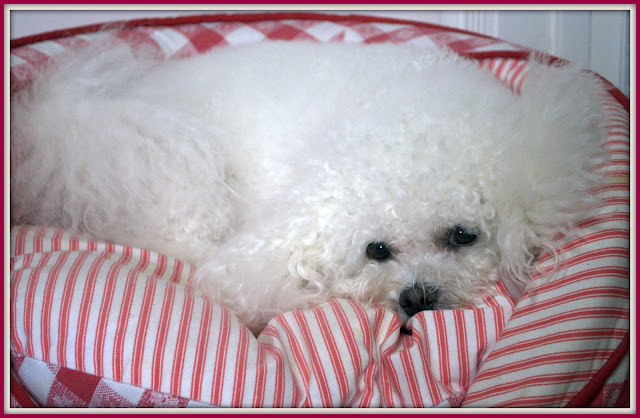 At first blush it appears as if I am just chilling out doing nothing.  Steeping in the art of the dolce far niente. But, if you have ever been in charge of quality control, than you know that the job is far more difficult than it appears. It is a mix of "control" and laissez faire.   Knowing when to step in and knowing when to step out. Too much control and you squelch the creative process of the "artist". Not enough control and you run the risk of letting the over confident cook into mucking with a venerable recipe to the point of destruction. It is a fine line, a balancing act.  I rely on my nose to lead my actions. IT KNOWS. The nose knows when there is enough nutmeg. IT knows when the bread is about to go from perfect to burnt, and I have to be able to step in and alert the momma.
To that end I have pretty much taken over the kitchen bed. I know JD is upset about this, but I am doing this for him.  Giving him time to enjoy his golden years. And I need to be close to action and still be comfortable.  The bed is to me what arch support would be to two leggeds.
Oh , did I mention that I am also an excellent taste taster? I am. And I am available for that task 24/7. And before you assume that there are no perils associated with that task, need I remind you that in this here household we run the gamut of exotica.  Yuh, America, from the Kategna to the curry, to the empanadas, to falsomagro, to the confit... one never knows what is coming at you.  This is not a PB and J joint. And the woman has some seriously wicked addictions to spicy and unusual. I am not complaining. Some of us have developed quite a palate. We even like aspic [jello is for daddy. UGH], and a couer de creme is welcome as is a grand madaleine... I am just not fond of peanut butter cookies...
And that brings me to the other peril of my job.  How to tell the cook that her latest offering is ...shall we say.... "caca" without risking a total kitchen shut down or worst... a complete alienation of affection and morsels?  It is not easy. Trust me. I use the dismissive lick, comforting technique.  You need to be honest and firm. Do not bury the taste bit. That just makes her think you are saving it for later.  Ick. No, you have to show her it's not good. You take it.  You sniff it. [do it even if your nose told you that from 10 feet away].  Roll it over, sniff again [OK pretend to sniff it again- it is called due consideration....] now look at her with your goo-goo eyes.  You know the look, eyes overflowing with love and compassion... eyes that say: "Momma, I love you, but this did not work. It is awful and if you dispose of it, we can both move on and nobody will ever have to know."  At this point she is likely to taste it again herself.  If she likes it, you are screwed.  It is staying on the menu. Thank goodness she hates horseradish as much I do... If she hates it, you still have to survive the "Is it salvagable" hurdle. Hopefully she will think not... otherwise, it is round two of the same...
I must admit I only recall a couple of incidents of total failure. She now refers to Marcy's recipes as "the crap that passes as food" and we do not venture in Marcy land. Two failures are just two too many.  For a while momma was testing recipes for America's Test Kitchen.
It was a mixed bag.  Some stuff was OK, some stuff was terrific and many recipes were just plain... bland...boring and a few were awful.  She stopped doing that when daddy went on a diet.
These days cooking and baking are the diversion from packing. No failures are allowed.
So... my job as QC is tough, and I take it seriously.
'vie
Posted by silvieon4 on Monday, November 28, 2011

Well, I have to admit, it came out quite well. And although there are not a lot of leftovers (and mama vacuum sealed the ones that are available) I am getting little bits of the result with my kibbles.

But man was I kept busy running between the kitchen where the pie and the dressing were cooking and the grill on the patio where the beer can thing was cooking. I really worked my paws off this weekend.

And then yesterday, mama decided to bake bread again. Delish! but she won't give me too much. But I did notice that a VERY large bag of flour came into the house this weekend. I've checked the calendar and I believe it is time for HOLIDAY BAKING! OK OK I can get on board with this. So watch my FB page and I'll post pix as mama finishes some of the baking. But as you and I both know, it's going to need some serious Quality Control monitoring.

Zackly- they work us to the bone!!! we should demand wages, not the mere pittance we get, regular wages.. union anyone??? Norma Rae???

Clearly QC is a very difficult job. Fortunately it seems you are up to the task!