Send me your change!!!

I need your quarters, dimes, nickles, pennies and dollars. I do!  I am not going to pass up this opportunity. Come on peoples, hand over the loose change!  It only makes you heavier and look, you could be bragging that you lost 5-10 -15 lbs even, by just sending me all the loose change.

Of course I have a reason. I need to gather all assets so I can put my bid in.
What?  Have you been living under a rock? Yea... MY bid.

"The rare Ferrari 599XX Evo will be one of the items auctioned off in order to raise money for Italy's earthquake victims.

Disaster has brought out the best in Ferrari.
The Italian luxury sports carmaker announced it will organize a rare online auction to help raise funds for victims of the country’s two earthquakes that killed 23 people dead and left thousands homeless.
"Ferrari has decided to collect funds to help the families of victims of the quakes which hit the Emilia Romagna region with a big online auction open to bidders internationally," the famous automaker said in a statement.
Among the "important and rare" items up for auction will be a Ferrari 599XX Evo, the latest of the luxury racing line's track-only specials, usually only driven by select customers as part of the brand's development process.
As well as the snazzy car -- which has a commercial value of 1.3 million euros ($1.6 million) -- racing suits and helmets donated by current Formula One drivers Fernando Alonso and Felipe Massa will also go under the hammer.
Items for sale will be offered on the Ferrari store website from next week.
"As soon as news about the earthquake came out, Ferrari clients and collectors from around the world spontaneously contacted the Maranello headquarters to offer their contribution," the company said.
Ferrari, which belongs to the Fiat group, is based in Maranello near Modena. The region was hit by a fatal quake on Tuesday, sparking panic and misery in an area severely damaged by another deadly tremor on May 20.
AFP/Relaxnews 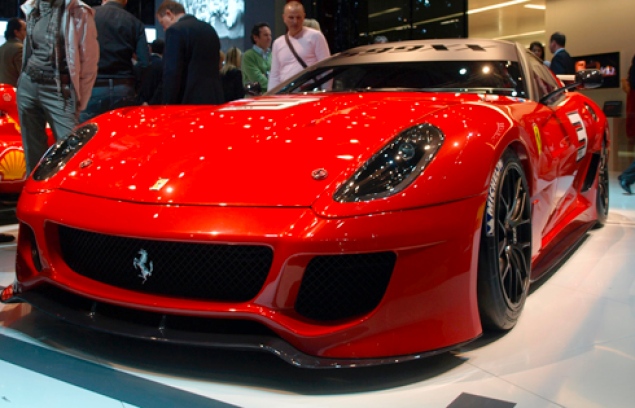 
Mow ho cool would I look doing Atlantic Avenue in this???  Hand over your change and jungle bells!!!  Besides, it is for a great cause. Earthquakes are terrible and I am just trying to do my part to help.  So, send in your coins!!!

Note to self, get polka dotted ruffled dress to coordinate with Ferrari Red.... Mhh I would like to go to Marenello and pick my wheels up in person. Talk about a Pimped OUT ride....

BOL, you better come pick us up
Benny & Lily