I was going to post the following and I was very very down... I made that small but fatal mistake. I had jumped to delusion....


"Yes, that's what I feel like. I feel Seduced and Abandoned. 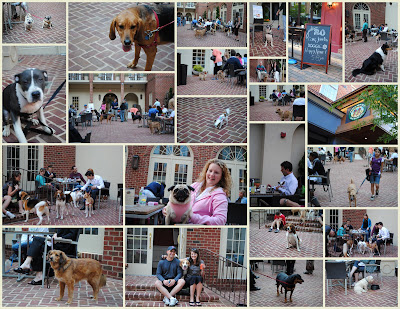 Daddy cheated on me. I found the evidence in his camera. He went to doggy cocktail hour without me. Can you believe it? I gave him the best months of my puppyhood and this is what I get. I allowed that man to rub my belly! I trusted him. And the second I did not go with him to DC, that very second.... poof he cheated on me. I looked through so many pics. I was trying to find which particular dog was the mistress dog, but the cheater is clever. That picture he omitted, deleted... whatever.

I feel despondent. I was here keeping the home fires burning. I was on duty. And this is my repayment. I just can't even write about this. And Charlie. My Charlie. Where was he? That's his hotel. OMD the humiliation...
Elin and Sandra I know your pain! Sort of. Kind-a....Ok maybe not the same way. BUT. This still hurts."

Just when I was at my lowest, daddy asked me to come sit with him and he showed me the pictures on his lap top. He said that he missed me so much that he was having puppy withdrawal. He said that he walked through the doggy cocktail hour with the Dowi to see if Charlie was there so he could deliver my message. Alas, Charlie was not at work, but lots of other doggies were there. Dogs like CHA-CHA a very nice rescued pug, and SLATE and BOSCO were all there with their 2leggeds. Daddy said somehow, even being surrounded by all those dogs was not enough to fill his empty spot. His heart had a big empty spot. He missed ME!!!! Now, how can a girl not love a daddy that says things like that?

We are going to make up for lost time today. I will be spending every second with my daddy.
And yes, we are having our own doggy cocktail hour.

Oh, 'vie, so glad your daddy is home and all is forgiven...