EDITORIAL.... not so thoughtless.... for THOUGHTLESS THURSDAY

Petco pulls all Chinese made treats.

lots and and lots and lots of attention grabbing headlines. Well, we thank PETCO and PETSMART.

It has been a long nasty, DEADLY battle. silvieon4: The Butcher's BILL

IT IS NOT OVER YET.

To date we have no idea what caused the deaths, and the illnesses. The origin of the treats was the single common factor- China. So, logic dictates that there must be some cause and effect. But the truth is, there have been plenty of US made treats that have been pulled for being toxic.
[ie:  http://www.fda.gov/Safety/Recalls/ucm399087.htm.
http://www.dogfoodadvisor.com/dog-food-recalls/....]

And we cannot ignore that fact.

We need to re examine HOW treats are made, stored, distributed etc. Regardless of where they originate from.  The fact that the regulatory bodies in China have been proven to be as ineffective made any sort of reliance on them ... impossible. Therefore, pulling those treats and stopping import was just and necessary.

The question that lingers is how do we need to change production to increase safety.

What causes Fanconi syndrome????  Do we actually know?  I mean beyond the ingestion of these treats???

The dehydration process becomes meaningless when the items are stored for months at a time in warehouses where the temperatures vary and moisture and humidity are factors.

And than there is that whole issue about the FDA's inability fully police the production of these treats. Just look here: KASEL industries comes to mind...
http://www.silvieon4.com/2013/02/kasel-associated-industries-recalls-all.html
FDA
http://www.consumeraffairs.com/pet-food-recalls-and-warnings?page=2

Call me skeptic, call me mistrusting... call me anything  whatever you want... even call me paranoid, TRUST HAS BEEN BROKEN a few too many times, and in very many ways.... silvieon4: The scam, out of shaken faith and deceptive ... Will I ever trust a package again? I don't see it happening. I have learned too much. I need to see substantial changes in manufacturing, FDA regs and distribution,

Will I ever believe that it is not about the bottom line and the almighty dollar?  No. But at some point somebody must realize that SAFETY will effect their bottom dollar. WE ARE BETTER EDUCATED CONSUMERS.

When it comes to what goes into my mouth, I trust what is made for me daily by those who love me the most.

I am sorry I am such a Debbie Downer... BUT we are talking about MY SAFETY here.


'vie
who remains vigilant and cautious.

It's not like we have not been writing about this..... LOOK!

silvieon4: The scam, out of shaken faith and deceptive ...
Jun 08, 2012
So, you are the educated pet owner. You would not feed chicken treats from China to any of your pets. But you have seen them for sale. At pet stores, {shame on you!!!!} at 2nd tier stores and discounters {greedy bastards!} .
http://www.silvieon4.com/
silvieon4: Editorial - Middle of the night OUTRAGE
May 19, 2014
In response to the growing awareness of the toxicity of dog treats from China, a Chinese factory owner ate a jerky treat to prove they are safe. My response? YAWN. That single action proves NOTHING. One treat is ...
http://www.silvieon4.com/

silvieon4: CVM Updates FDA Continues to Caution Dog ...
Nov 22, 2011
In the last 12 months, FDA has seen an increase in the number of complaints it received of dog illnesses associated with consumption of chicken jerky products imported from China. These complaints have been reported to ...
http://www.silvieon4.com/

silvieon4: What's the difference??? Recall v PULL
Dec 17, 2011
You all know what a product recall is. The FDA has issued tons of recalls on dog foods, and treats. Last one is for Chicken jerky treats made in China which have been linked to death of as many as 92 dogs. But that is not the ...
http://www.silvieon4.com/
silvieon4: FDA Finds Salmonella in Nature's Deli Chicken ...
Oct 05, 2012
Once notified of the results, the company recalled and ceased distribution of its product. This sampling and recall is unrelated to jerky pet treats from China that are associated with reports of illness in dogs and cats. Information ...
http://www.silvieon4.com/
silvieon4: Fruits and safety issues for DOGS
Jun 15, 2009
She says the ones that she's been buying come from someplace called China and that they don't always make safe food. I mean really now, why would they not want to make safe food? Who would want to eat not-safe food ...
http://www.silvieon4.com/
silvieon4: Waggin' Train, LLC and Nestle Purina PetCare ...
Jun 09, 2014
of consumers and Waggin' Train, LLC and Nestle Purina PetCare Company. If given Court. approval, the agreement would resolve disputed claims related to Waggin' Train and Canyon. Creek Ranch dog treats made in China ...
http://www.silvieon4.com/

ilvieon4: Can you read Chinese?
Jul 09, 2012
Check this out: VERY Bad News for Raw Feeders · FDA update on Chicken Treats from CHINA 7-18-2012 · Dogs help fight cancer · Sticky feets? Hyundai Elantra Coupe Zombie S... And G__d help the sister who comes · Yes.
http://www.silvieon4.com/
silvieon4: Kaytee Recalls Bird Treats and Greens Due to ...
Feb 23, 2013
... North Carolina, Oklahoma, Ohio, Pennsylvania, Puerto Rico, Tennessee, Texas, Vermont, Virginia, Washington, and Wisconsin; and, into the countries of Canada, China, Guam, Japan, Korea, Kuwait, Pakistan, Singapore, ...
http://www.silvieon4.com/
silvieon4: Kasel Associates Industries Recalling Certain Pet ...
Feb 23, 2013
All of the products were made in the U.S. This action is not related to FDA's ongoing investigation of jerky pet treats made in China. Salmonella is a public health risk and is one of the most common causes of foodborne illness.
http://www.silvieon4.com/ 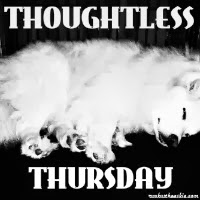 wow! So much information here.
Thanks for sharing on Thoughtless Thursday.
ღ husky hugz ღ frum our pack at Love is being owned by a husky!

I've noticed a lot of scary headlines on this issue over the past few years too. I don't understand why our government still allows pet OR human food products to be imported from China. I try to be vigilant too. Sometimes it's worth paying extra for the Made in the USA label…but that can be deceiving too sometimes :(