The Good, the Bad and the Ugly

Momma must have chocked off blood flow to her cerebellum when she put on the stupid pink Spanx.

[There are times that I wish technology had progressed enough for me to have filmed that whole "activity" and put it to music. It was quite the choreographed effort and I do believe that momma has invented a new kind of music. A cross between rapping and panting.  I do think she has invented the PANTING -RAP.  She really should patent that as it has great entertainment value]

While it had great performance value, I do wonder what the insurance requirements would be for the audience.  I mean, how much faith can one put in a piece of fabric before it reasonably snaps off and takes out an eye or something?

In any case, she spent 15 minutes putting on, and 3 minutes taking the poor pink thing it off calling it evil. It the end they both lay across from each other, both looked exhausted, defeated and worn out and truly you could not tell which was live and which was memorexed...

Starting the day like that has put momma in  a seriously funky mood. And apparently there is no  mood reset point.  None that I found anyway. Although licking her ear seems to send her into some strange dance ritual which ends with ear washing, it is NOT a reset. Whatever.

Let's talk about how unhinged the woman has become. I was the "good" baby this morning after I ate my breakfast.  She told me ten times what a good girl I was.

Then she did the SPANX performance piece...  Post breakfast I went out for my constitutional and I might have ...dragged my tush in the grass or mud. It itched.  When I came back I got picked up , turned over and immediately washed. From bits and pieces to paws... And I was told how bad I am....

About 10 minutes ago, she, the now fully fowled mooded momma, said I need to get groomed and that I am ugly.

Should SPANX come with full disclosure of side effects???? I think they should.  Now, do any of you know how to defunk my momma ... cause I might be a lot of thinks, but UGLY is NOT one of them. 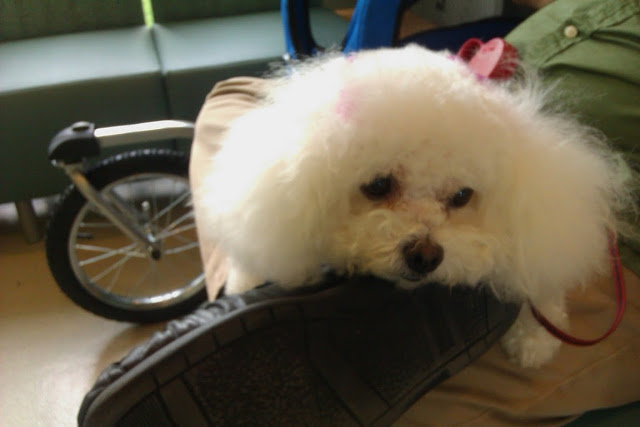 I don't know about mood resets either. My mama is in a really bad mood too. It has something to do with this thing they did at work this week end -- something called a costume gala. All I know is LOTS of strangers have been coming to get costumes from mama and me and mama was gone ALL night on Saturday and I have to stay home from work today! Mama did tell me about the pink spanx thing though -- she said it is EVIL and that if you really love your mama, you, wendy and jd should bury the thing somewhere -- or your mama will keep trying it! As far as making your mama feel better, have you considered maybe offering her one of your chewies? I know 2leggeds aren't that into chewies, but ya know, it might be xactly what is needed.

On a different note, do you guys know if you are trick or treating or are you handing out stuff to the little 2leggeds tonight?

Mama said that me and Gigi get to sit out on the front porch and greet all the little 2leggeds. We don't even have to wear costumes! My toy bichons will be wearing costumes and the little 2leggeds will have to figure out which of us are real and which are not! We did this last year and it was lots of fun.

You are gorgeous, 'Vie, and I bet your momma knows that! But those Spanx are evil things ... and they can put the ouchy on a person, and make them extremely cranky.

YOU are BEAUTIFUL!!! And tell your momma we said so!!
xoxo Chloe and LadyBug