Beware White Dog Cottage residents, one of your hooomans who shall go un-named was caught in multiple pictures canoodling with a Poodle. Capoodling. Seriously. Brazen of the Poodle. Even more shocking from our own ... Bichon Rescuer Par Excellence.  I only bring this up because you guys must re-assert territorial imperative.  Rosie, while you were off sulking do you know what your momma was up to??? Hmmmm??? I am just saying.  She was capoodling. Nuff said.  Said poodle was later seen canoodling with Freddie's daddy. Freddie, my momma questioned him and made sure he knew he was capoodling. Credit to my momma, I did not see her capoodling. Did she? Really? When? Rolling eyes. Groan.  Hooomans. Loyalty with them is always optional. Vickie, I understand the Poodle lives with you.  Was this on purpose? Are you Bichonazing her? I hope so.  And she understands the hierarchy and all, right? I know, I know, your momma is a rescue angel, I am just trying to understand it all. You know, protecting our own, if you will.

Lets's see, other good yayas... Gordon looks like the Wendy. Zackly same face and potoush. WE think they are related. Wendy is not convinced.

Yes,yes, Mrs. Marsha won the cheesecake again.... Or should I say again, again, AGAIN. Momma had made two, some one else won as well. Wonder how she does that trick. 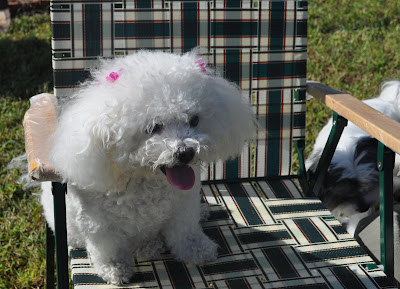 And it was cool to be able to talk to momma with Ms Diane. Really cool.  Maybe now she will share her perfume with me more often.  And not the clear bottle, I like the one with the black top. I really do. And yuh, I am too worth it.

And to prove to you I am not a breedist...I really really loved a certain Maltese dressed as police officer.

Momma lied. She told the two leggeds she sucked all the calories out of the rye bread and the Boursin. It was a lie.  I watched her make both. The calories were still in there. Sorry guys. skip lunch or something to make up for it.  And the cheesecakes each had 4 lbs of cheese and calories... just saying. Because I did not get any and maybe I am a wee bit bitt"a"...

Sounds like a fun bash, even if you were invaded by non-Bichon-Americans. As for the calories, I think it's a good thing your momma didn't suck them out. Because whenever they do that for real whatever's left tastes gross. I don't know why they bother.

Wow, your Mama canoodled a poodle? Mine does that every day and she says I have tobe nice to the Felix, but I never ever expected it of YOUR Mama. I thought she was thoroughly "bichonized".. Crazy, just crazy. Other than that, sounds like a fab time. ( and rye bread doesn't have calories. Just happiness. Says the Mama.)

We agree with Kolchak! Never knew your mama to be a canoodler of poodles! Bet that cheesecake was just divine!!! Love the pictures!!
xoxo Chloe and LadyBug

a poodle! You are kidding
Benny & Lily

my mama's capoodled too. It's an epidemic. She's even fostered a few poodles and brought them onto our turf! Can you imagine? The bash looks like it was a blast! Wish I had been there.