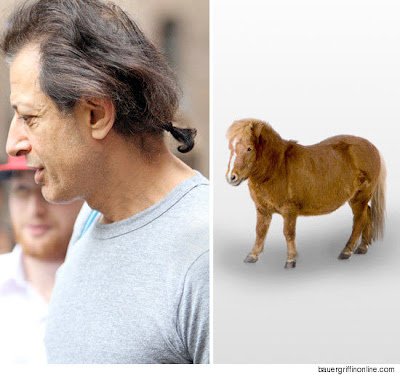 Jeff Goldblum Has a Mini Pony

Oh I am soooo ticked off! You all know how much I have want a tiny horse! I have been wanting Einstein for a life in being [mine] and 21 years! But I don't get a tiny horse. Noooooo . But that ugly man who did that awful fly movie gets a mini pony! Do you know how tall that dude is? How is he ever going to ride that poor tiny pony? I think that tiny pony should be rescued and I think we should take it to White Dog Cottage! If that dude tries to ride him ... that tiny pony is going to die! There is steam coming out of my ears and it is puffing out my due! I can't even talk about it. Somebody do something!

HA? what do you mean pony tail? I don't believe you. Blah blah blah... I am NOT listening. I want a pony. I want my pony. I want EINSTEIN! And I want that tiny pony to be safe!

they will lie about anything not to get me my pony.
equestrian wannabe
'vie
Posted by silvieon4 on Monday, August 23, 2010

Oh, I forgot to tell you that we went to see some mini ponies two weeks ago, 'vie. They were bigger than Einstein, but definitely cute. Their owner said they were just like having dogs (of which she had three). In fact, she said they made less noise than her dogs. Tell your momma that and see if she won't reconsider...

Momma is snarky. She asked if they come with tiny shovels. SNARKY.... like I said... and she still sounds like a bad man...

Mini Ponies are very cute! I do know that some of them Can be Kinda Nasty and give a nasty bite.
I will stick to dogs.
Your Friends at
http://www.lifewith5dogs.com/

Now miss SNARKY is nodding and raising her pointed finger at me... I still want Eistein!

We know you'd love an Einstein 'vie, but it would take away from YOUR belly rubs and treats and such...just sayin!
xoxoxo Chloe and LadyBug