Is that momma finally coming downstairs????

It is has been like forever! Do I hear her coming downstairs? 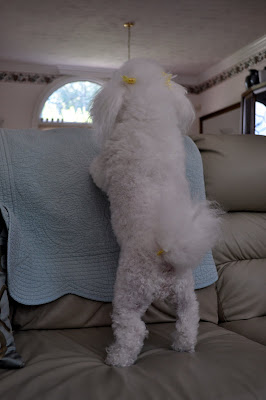 I better get ready to play! I love her chasing me up and down the top of the couch! This whole week that woman has been living in her bed. She snuggles her tissue box, makes awful barking sounds and smells funny. [I did not say bad. I said funny. Like in ha ha... ok like in ick... but don't tell her] Oh and she gave her "bug" a name.... she calls it "fluenza" - wait what?

JD says "In-fluenza" . Mh... is that different? Is there an "out-fluenza"? It would be way more accurate because there is lots coming out of that woman and not much going into her.... But hey I am just a Bichon with great observational skills, what do I know? 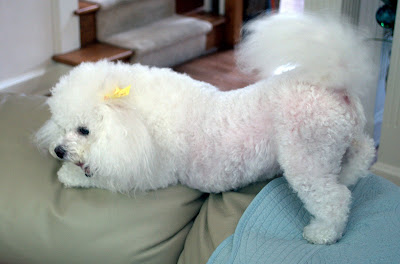 I am waiting and posing... and waiting... and waiting...
She is slowwwwww. The "bug" filled her ears and her balance is not there. Or... she is tipsy. Either way she has to hang on to things. Well at least she is not wearing those tall shoes.
And while I am waiting let me vent. If I had a nickle for every time momma stopped me from giving myself a great ear scratch it would be Silvie Trump [and my rescue would have an open door policy to all needy Bichons without wait]. But nobody stopped momma from her ear scratching...ehm Q-tipping- which is using a tiny stick to scratch the ear...! And is the woman garbage possessive! Not a tissue, not a q-tip, not a paper towel...nothing is left, she hoards it . She has been insane about her garbage. Like she is going to save it or something like a trophy? She hands the tied bag to daddy to "dispose of" and God forbid he does not take it out immediately.
And then a couple of days ago she started this itchy thing.
You know how your 2legged tells you to stop scratching? You know how it drives you crazy?
Well, let me tell you when a human itches... their scratching IS insane!
Apparently momma had some "lergic" thing to something she was taking for her ears. So we have been privy to her itch and scratch fest. It is amazing. Ten digits to scratch, two thumbs and they still "can't reach the itch!" ... and they stop us from a great back scratch on the deck... I am saying nothing...what's that word??? hypocrisy...? Well, this is going to take a while, if she actually does make it down. Might as well get comfy and wait..... 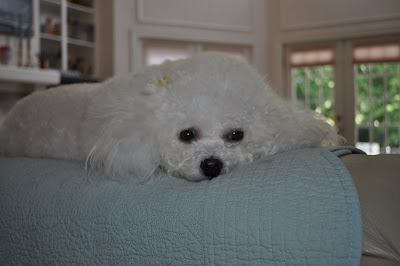 Oh, your poor momma, 'vie!!! Tell her we are worried about her and we miss her!

I'm so sorry that your momma is sick 'vie!!! Hope she is feeling better REALLY soon and tell her that we miss her!!! You, on the other hand, look very nicely coiffed!!! xoxo Chloe and LadyBug and the Mama

Silvie Sweetie - I know it's all about you but your Momma is NAWW* so you need to be patient with her. Maybe some Bichon kisses gently administered to her nose might help? We miss your Momma too!

*Not A Well Woman