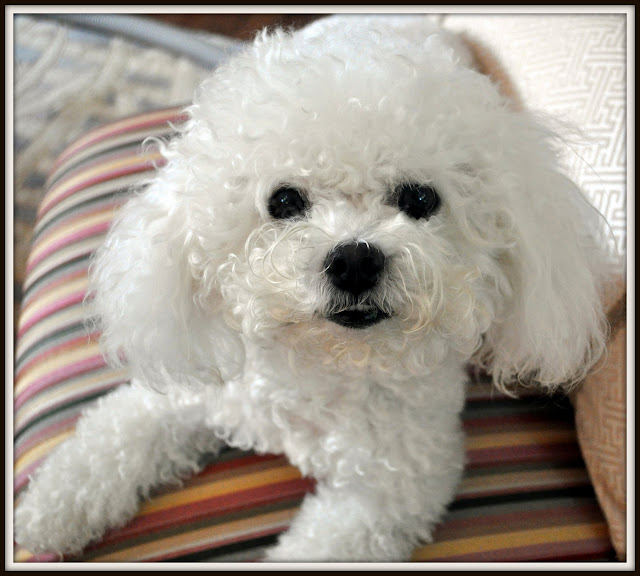 So, it is 2 am and the resident insomniac is up.  Obviously JD and the Wendy are not.  Those two will go to sleep in the middle of fireworks display and who is up is not an issue. Moi, I have this sense of duty and until I put the momma to bed, I will dutifully sleep on her, lay on her, lick her hands, demand belly rubs, anything to encourage her to take her tush to bed.
But that is not what this post is about.  At 2 am, this TV commercial comes on. "Want to make your Christmas special? Put a puppy under your Christmas tree!....Blah blah Blah... puppies from >>> {no I will not give them a plug! puppy millers do not deserve that!} make the best pets."  Ok, I rolled over so fast, I almost fell off the couch. In which enlightened universe it is OK to "give" a living, breathing being as a "gift"??? Are you nuts?
Hellllllooooooooooo, at best a puppy is a 15 year commitment. Not a cute resting place for some plastic coated cheap mart red bow. ONE. it is NOT fair to the recipient to be handed a puppy. Like any good relationship, there should be courtship, "dating" personality matching. Could you imagine the hell my life would be if my two legged was a couch tator with no sense of style or fashion? I would die... Or a can opening kibble feeder? I could not even imagine living with someone like that!!!!!
TWO. Who on earth would be sooooo stupid as to do that to a puppy? And who hates the human that much to hand them a poop and chew machine having taken away the benefit of choice or better timing?
You know, there are a lot of things that two leggeds do that defy reason. But this combines stupidity, greed, selfishness, ignorance, lack of morality, lack of common sense, lack of understanding... [I could go on for ever here...] and attempts to "legitimize" it all under the caption of "Christmas present". THE HORROR.
Why are "pet stores" being allowed to exist anyway?  So puppy millers can dump the "products" of victimization and torture on stupid humans who by now SHOULD KNOW BETTER?  And this garbage of them advertizing late at night. You cheap bastards, you unfeeling twits.  No, momma, I don't want to climb on my soap box.  I am standing on a pile of rightful indignation.I am tall enough.

PUPPIES ARE NOT PRODUCTS. THEY ARE NOT CHRISTMAS GIFTS.

To paraphrase  Shylock [The Merchant of Venice] I am a being. Hath not a puppy eyes? hath not a puppy paws, organs, dimensions, senses, affections, passions? fed with the same food, hurt with the same weapons, subject to the same diseases, healed by the same means, warmed and cooled by the same winter and summer, as a human is? If you prick us, do we not bleed? if you tickle us, do we not laugh? if you poison us, do we not die? and if you wrong us, shall we not revenge? If we are like you in the rest, we will resemble you in that. If a dog wrong a human, what is his humility? Revenge. If a human wrong a dog, what should his sufferance be by human example? Why, revenge. The villany you teach me, I will execute, and it shall go hard but I will better the instruction."

Like I could even sleep after witnessing that miserable commercial.  And Cox, SHAME on you for actually selling time to those soul less cretins. Do you really need that pittance of revenue that much that you are willing to become a co conspirator? Ehhh.  Look who I am asking that of. No it is NOT JUST business. Everything has consequence. your business depends on public support.  I do not support you.  Would you sell air time to someone selling human babies to be placed under the Christmas tree? No?  Why not.  LE MEME CHOSE ICI!
Momma, a hand please, I need to get off the rightful indignation before my heart explodes.  Hold me. I need to feel love.
'vie
PS. Anyone who dares "give" you a puppy is an unfeeling moron and you should run away from that relationship...
Posted by silvieon4 on Monday, December 05, 2011

'Vie, we could not agree more!

A commercial for PUPPIES?! What the heck are they playing in the dead of night. They should NOT be advertising pups with ginsu knives and juicers.

We need to start a PROTEST!!! We are RIGHT behind you on this 'vie! It's just WRONG to be advertising this sort of thing...leave it to the knives and juicers...just like Kol says!! By the way...your momma is just like ours when it comes to the late hours...we have decided we need to get our beauty sleep, so most of the time we give up and let her stay up all by herself.
xoxo Chloe and LadyBug

Momma says Ms Shingles visits late at night and keeps her up. Last night it was 3 am before she finally went to bed. I just sleep on top of her, next to her, under her, as long as some part of me is touching her I am good to snore. Cox had no real comment other then they do not control content. But they do control who buys time...

I'm in full agreement with all of you! Would anyone ever give a 2-legged baby to someone as a present? No they wouldn't. Four-legged babies shouldn't be given as gifts either!