The mail dude came this morning. Apparently the rush of holiday mail has short circuited his brain. He was treat-less. I know, can you believe it? Usually he has a little "sumeting", not today. I would really have resented him a lot more, but he gave momma a package from you. And my silly momma has not stopped smiling since.
She "loves loves loves" what you made for her and has already told me a zillion times that each stitch was placed with love and she "loves" that. Thank you for making her day.
Now for the conundrum. Momma has already announced that this is a special apron and that she will use it on special occasions. When did making my din din stop being a special occasion? Mh.
Momma said she will get the next hooman that comes over to take a pic of her wearing the apron. I offered, but she went on and on about thumbs. Whattttttt eeever. 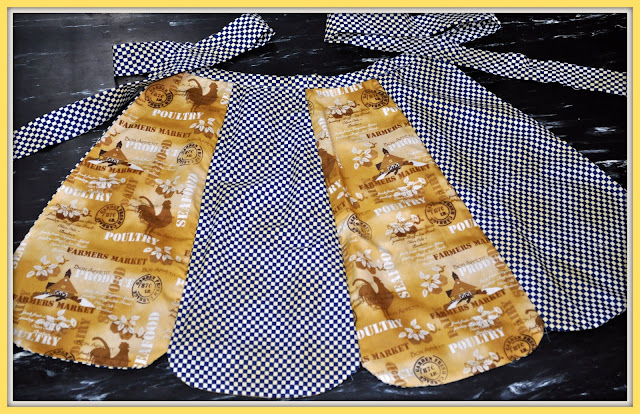 And then, you sent her these towels. How did you get a hold of my puppy picture?  JD thinks it's him....The Wendy has spent an hour comparing herself and claiming it's her.  Whatever, let them steep in their delusions. We all know it's me. And I thank you, again because now  I can "finish" the look of the stove with a little class. 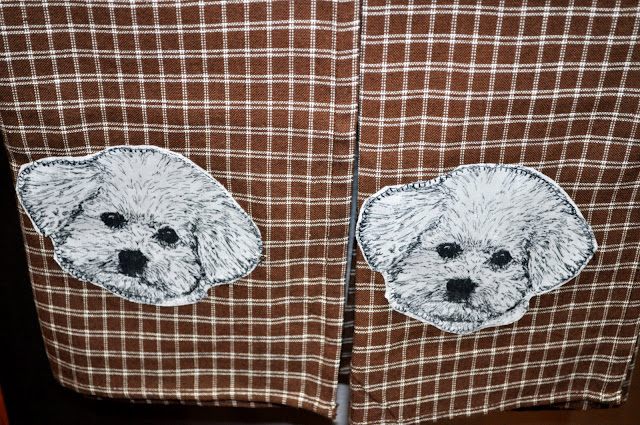 I tried sniffing up the package. I think I smell another dog or two, but momma snatched it from me because she says I am a known paper shredder. Hey I am environmentally responsible. You know... recycle and all that rot.

Ha. Momma said if you lived in Tidewater, auntie Robin would have you making these aprons for TBFR! She would too. And momma is going to take it to the next White Hat Society luncheon and show it off!

Auntie Claire, again, thank you. She is wearing it and dancing and prancing about...dang this lack of thumbs... You Tube would have the next viral hit...Crazy woman dancing wearing an apron... You have to see it to believe it.

The mail dude apparently needs a talking too !
Those towels are adorable
Benny & Lily

That Auntie Clairebof yours is terribly talented. Those towels are just. The spitting image of you Vie!

Oh! These are definitely YOU 'vie....no question!!! Your Auntie Claire is very talented! Great job on those towels!!! xoxo Chloe and LadyBug