The list of much needed inventions. Get on with it! 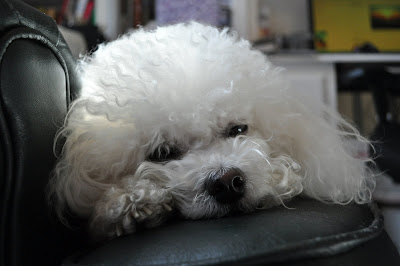 While I hate fiction, I love Star Trek. It makes perfect sense to me, because I view Star Trek not as fiction, but as a blue print of things that have not been invented yet. NOT fictional. Simply not yet developed. And I am growing impatient. So, instead of wasting money and time on useless caca, let's get with the program already! Stop squinting. I am NOT crazy.

We need a food replicator. I will settle for a YUM.file extension program that will let you forward goodies etc. Hurry up. We need this!

You think I am just cute and fluffy, but not grounded in reality? Ooook... next time you walk into a store and those doors just open for you, in your little head add the whhhhooosh sound that you first heard on Stark Trek ...

Sooo, when is that teleporter prototype going to be showing up at my doorstep? I am so very tired of having my two leggeds trapped inside the telephone. Like last night. I wanted daddy. All I got was daddy's voice coming out of the stupid telephone. Every try to get a belly rub from one of those? Or lick one of those? Useless plastic. I wanted daddy. But he will have to "travel" to get back home. How pawsitively primitive. Teleporting would solve that issue as well as the overcrowded flights, the pollution caused by cars, fuel crisis... etc etc. So... message to the inventors... We don't want or need another stinking layered piece of gum. Stop working on that. Start working on the transporter. STAT!

And while you geniuses with thumbs are at it... a hologram deck would be ever so nice. I know I could use a change of scenery just about now...

And...yes, the Da Vinci surgical robot is ok, but really... Bones would have called it barbaric. Do we really still need to cut and stitch? Do we really need to stick that thermometer in a private place... Dr K???? Hmmm??? Remember the hypospray? Bones used it all the times. With a hypospray injection, the medicine is forced under the skin with high air pressure, NO needle is required. We call it a jet injector and it is now used by all the best medical offices. Dr. K, getting one of those soon???

Remember when Scotty used transparent aluminum to transport the two humpback whales (George and Gracie) to the Earth of their time? Yes, we now call that aluminum oxynitride aka ALON. ALON is a ceramic powdered material that converts to a crystalline form like glass, when heated under pressure. It is strong enough to withstand bullets. And guess what? The Air Force is now using it... Thank you Scotty!

How about this... next time you put on your Blue Tooth earpiece.. think Lieutenant Uhura. Yea...

And tractor beams are a reality used by NASA daily to perform maintenance functions on satellite, we call them "Optical Tweezers".

Phasers... are being developed. Its ancestors are common place...stun guns. tazers... and such...

And Geordi's visor is more than a theoretical reality and in 2005, a team of scientists from Stanford University successfully implanted a small chip behind the retina of blind rats that enabled them to pass a vision recognition test. Human trials are closer than you think.

Remember Tricorders? Spock had one with him at all times. NASA uses a hand held device called LOCAD, which measures for unwanted microorganisms such as E. coli, fungi and salmonella on board the International Space Station ...and your diabetes meter is being expanded for heart monitoring and cancer monitoring and LOCAD will soon be available for home application to measure gasses, molds etc.

And while you are "dictating away" or listening to a pre recorded message or listening to your NUVI... think... and remember that the first computer that ..."talked"... was on the Enterprise.

Oh and one more thing, look at that nifty cell phone, 2. 3. 4 G whatever... it all started with the Star Trek communicators. What are your coordinates now?

I am NOT crazy, I am just an impatient visionary
'vie
Posted by silvieon4 on Friday, January 28, 2011

She points to the many books she has read from Robert Heinlein to Arthur Clark to all the other really COOL science fiction (um, more like science vision) writers. She reads her books on a kindle (mama tends to be an early adopter of these things), she has an iPhone that she used to listen to satellite radio on at work. Mama keeps reminding me that when she was in school, computers were just being invented and the ones that existed filled up whole houses! Now her mac-mini is a teeny thing sitting on the bookshelf. Hmmmph, mama says she has to get ready to go -- she and John are going to san francisco today to go to mac-world. I wonder if they will be bringing any cool toys home or treats or chewies. I'm low on treats right now. Mama says it was my own fault though -- I should not have chewed open the bag of treats in John's office and eaten a month's supply of pupperonis.

Oh I agree it was always more than Star Trek, but Star Trek is the one this generation relates to. Lucian's True History is generally unheard of..[momma is a Geek... as if there was a doubt] Urashima Taro another piece that was so dead on. How about The Disposessed? Ahh a perfect afternoon, coffee, great reading, crackers, grapes, cheese...I love, love sci-fi. Wrote a college thesis on sci fi as the map of psycho social development for new concepts.
I hope you do get some neat new toys.
Meanwhile, I will ask auntie Robin to bake you some liver lips. You will love them.

From Foley Monster: I don't share this with everyone but go to your laptop and type in http/www.pupdownload/transport/beammeup then put where you want to go and it will upload you there. Just make sure you have the codes and a lap top to get back before Mom notices you're gone

Woot Wooten! I agree, with a full WOOF 'Vie! Get on it two-legs, we need food replicators, like yesterday! (BTW - I dunno if I would use Foley's downloading trick. ~*~giggles~*~ She's gotten herself into some serious mischief with that downloading thing.)