San Francisco – January 9, 2013 – Milo’s Kitchen® today announced that it is voluntarily recalling its
Chicken Jerky and Chicken Grillers home-style dog treats from retailer shelves nationally. No other Milo’s
Kitchen® products are affected.
On Monday, New York State’s Department of Agriculture informed the U.S. Food and Drug Administration
(FDA) and the Company that trace amounts of residual antibiotics had been found in several lots of Milo’s
Kitchen® Chicken Jerky. After consultation with the New York Department of Agriculture and FDA, the
company decided to voluntarily recall Milo’s Kitchen® Chicken Jerky and Chicken Grillers, which are both
sourced from the same chicken suppliers.
The use of antibiotics to keep chickens healthy and disease-free while raising them is standard practice in
poultry production for both human and pet food. However, the antibiotics found in the products were
unapproved and should not be present in the final food product.
Milo’s Kitchen® has a comprehensive safety testing program in place for its products from procurement
through manufacturing and distribution. Part of that program involves extensive testing for a wide range of
substances commonly used to ensure the health of chickens. However, Milo’s Kitchen® did not test for all
of the specific antibiotics found by the New York Department of Agriculture.
“Pet safety and consumer confidence in our products are our top priorities,” said Rob Leibowitz, general
manager, Pet Products. “While there is no known health risk, the presence of even trace amounts of these
antibiotics does not meet our high quality standards. Therefore, today we decided to recall both products
and asked retailers to remove the products from their shelves.
“Consumers who discard the treats will receive a full refund,” said Leibowitz. “We are committed to Milo’s
Kitchen® and stand by our guarantee of complete consumer satisfaction.”
Consumers with questions about Milo’s Kitchen products can get further information at 1-877-228-6493.
# # # 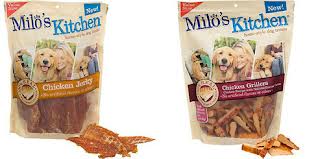