Yes it is MONDAY! 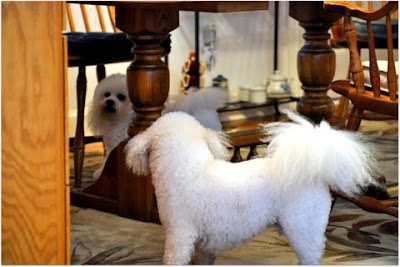 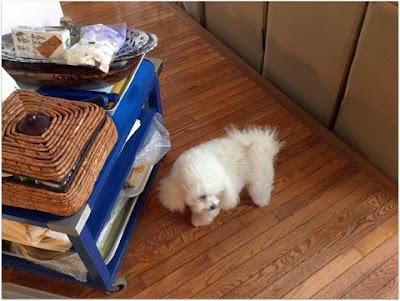 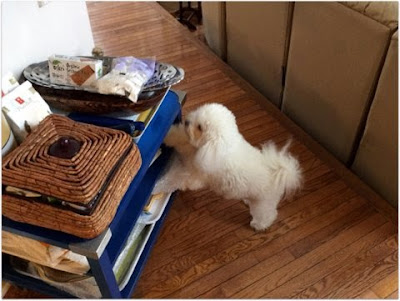 it is also PASQUETTA!  and yes...until Saturday...it is Passover.  So, Buona Pasquetta, and Happy Passover to one and all.

Lots is going on in my house. Lots of smells, lots of foods, lots of "traffic".

I really believed that they were all too busy to pay attention to us four leggeds. So, in my own "opportunistic" self, I decided to carpe diem and I proposed a  brilliant plan of action to "liberate" some goodies...  The UNDER THE TABLE committed was really not as receptive as they should have been. They are just very lackadaisical about stuff like that.

Including the Cosmo in such a plan would have been a sure disaster. That boy is all kinds of crazy. He would have gotten us caught and convicted without even getting a nibble.

Confronted with apathy, I was left with only one choice. ACT ALONE. and ACT ALONE I  DID.

You see... the pictures. You see my bravery and brilliance. Yea, unfortunately I was "caught" by the momma herself who is forever reaching for tissues and that reach was along my path... Nuff said.

Sniff. I should call her that.  She is better, She seems to be getting over her flu, which has now been downgraded to "just" a nasty cold, Sniffles, Whiffles. Wheezes. Coughs. Yes, you get it. Along with a super deep gravely voice that makes her sound like a tabacchy chewing sailor, the woman is a cacophony of sounds.  A veritable Migna Watata. [sorry inside joke, for all Asmarini] All she is missing is the umbrella, And how I did not hear her... I don't know.  I guess I was focused. Too focused.

Look, I love those little buttery dinner mints. LOVE THEM. I saw a whole package of them I figure I would get it down and... share?!

"Sniff" herself let me get close enough  for her to take pics, and the, the selfish woman, snatched up the package and put it on the high counter completely out of my reach.  Seriously.

Deep breath. Yes I was angry. Yes, I let her know. I think I quoted Kanye a few times... Hey, I wasn't looking to make sense, I was going for impact and inscrutability!

But Sniff just reached for another tissue and moved on. Sigh.  At least I will not have to live with regrets.  I tried, Had I succeeded, I would have happily lived with remorse.

Hey do you have any butter mints you can send me???

Happy Passiver! We want Pasquetta whatever it is
Snorts
Lily & Edward

Life with Dogs and Cats said...

Sounds like you sniffed out a treat!
--Wags (and purrs) from Life with Dogs and Cats