Soldier returns from Afghanistan to learn his beloved dog is gone 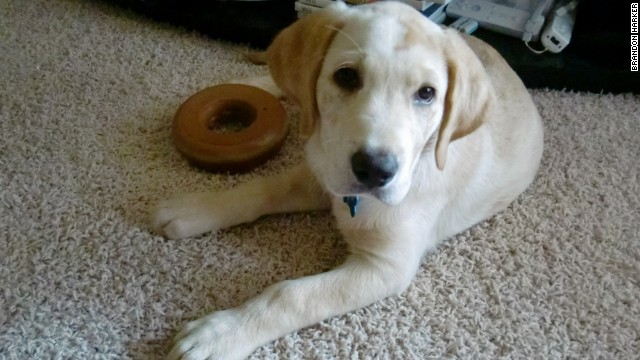 1st Lt. Brandon Harker says he returned from deployment in Afghanistan to find the friend he'd left his dog, Oakley, with had given away the dog.
STORY HIGHLIGHTS
(CNN) -- A purebred yellow Labrador retriever, Oakley likes to run, swim and get into most everything -- "whether it's trouble or not," his owner 1st Lt. Brandon Harker affectionately says.
And as much as anything, Oakley enjoys cuddling wherever, with whomever. That's just what Harker wanted to do with him this month, when he got back from a 9-month deployment to Afghanistan.
Except Oakley was gone. The friend with whom Harker had left Oakley said he'd gotten rid of the dog.
"I'd just like to get him back, safe and sound," Harker said Friday night. "That's about it."
About a year after joining the Army, Harker got the playful lab over Memorial Day weekend in 2011, while he was at Fort Benning in western Georgia.
Describing him sweetly as "a very big baby," Harker said Oakley loved to snuggle.
"It doesn't matter who it was, he'd try to crawl up on your lap."
Whenever Harker was in the United States, Oakley would go with him. And whenever he deployed, his beloved dog would be left with a friend.
That's what happened last year, when the lieutenant left Oakley with someone he described as a "good friend" before he headed off to Afghanistan.
"Every time, while I was gone, I asked about him," Harker said, recalling how his friend would insist Oakley was "doing good (and) acting like his regular self. "I'd ask for a picture every now and then. But I never got any pictures sent to me."
Harker learned the truth as he was flying back to Joint Base Lewis-McCord in Washington.
"What do you mean you got rid of my dog?" he told his friend.
In the few days since coming back, Harker has been on a mission. He posted a plea to find Oakley on Craigslist, noting that he didn't know if the dog had been sold or given away -- something he'd been told happened in May, though Harker isn't so sure.
That online item describes Oakley as being "good with kids and other dogs," with darker yellow spots on his face and going down his sides and legs. He is registered to Harker and has a microchip identifying device, and is a few days shy of being 2 years, 4 months old.
Writes the soldier: "If anyone has any information on this and can help me, please do."
Posted by silvieon4 on Tuesday, July 30, 2013