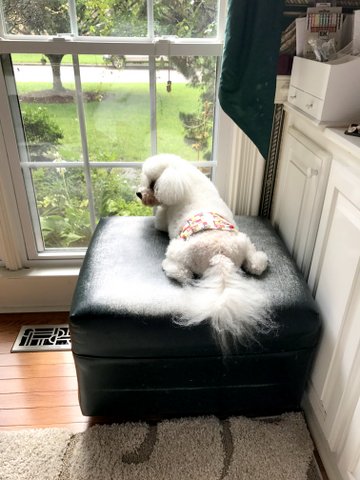 JD demanded his old observation post!
He actually reclaimed it after almost a year.
And he looked out the front yard. And he watched! Watched being the operative word.

But, this last one was a doozy. His eye pressures went up, very up. Momma cried for days. And then when we thought he got all better and pressures were under control, a seed shell flew into his healing eye and stuck itself on his retina scratching it and ... yes then his pressures went up again!

We thought he would lose his eye. You guess it. Momma cried and cried until
her eyes were so red that we worried about her.

And the eye drops, and constant trips to see the eye vet, and more drops... and the schedule for the drops, and momma's hyper-vigilance which drove us all crazy...

JD was unhappy, he did not want his window post, he really did not want to be alone and he did not even want to play except with me. He loves me no matter how he is feeling.

We thought for sure he lost all vision in his left eye. But you know what? We were wrong. Slowly the king is coming back.  We caught him watching TV. Tracking momma.  Tracking a bird.  Yesterday he demanded that he be given back his seat at the dinner table!

Yes, he has elder privileges. He sits at the dinner table with the hoomans.
He had not wanted to, but the last couple of days, the king is back, he barked them into giving him back his seat.

And claiming his observation window is the topper to his recovery!

Welcome back your majesty.
We have missed you, 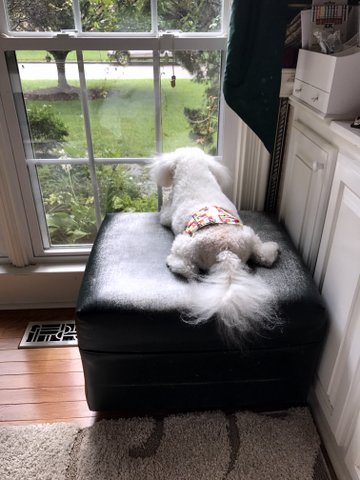 JD, bro, so glad to hear that you are doing so well. I have adjusted to not being able to to see and have the mama trained to stay on schedule so that I know what to do. She has gotten better at telling me how many steps are left when we come down the stairs. But I do like to freak her out by jumping down two steps sometimes. It feels like flying. You keep up the good work doing your job.

Rocky, I have to be honest with you. I take full advantage of my issues. I play up the old age bit to get rides everywhere. I bark momma and daddy into doing whatever I feel like. I don't pay attention to time or place. 3 am? So what of it? In the middle of dinner? Oh well deal with it! Lately I have taken to demanding I go out with daddy alone. Yes, alone. No barky barkster Cosmo. No sharing the "resource". I even have daddy buffaloed into believing we are both old men. and as far as my vision issues... I like lights! I get lights! I am talking full on stage lights. Momma says nothing. She says she understands. She has implants in her eyes. And I have re decorated! I now have mandated colorful rugs on all landings! 1. I can see them better 2. they are more my taste. 3. soft landings! Oh and I demand TV. I like watching certain shows. Call this old man privilege. Its good to be old.