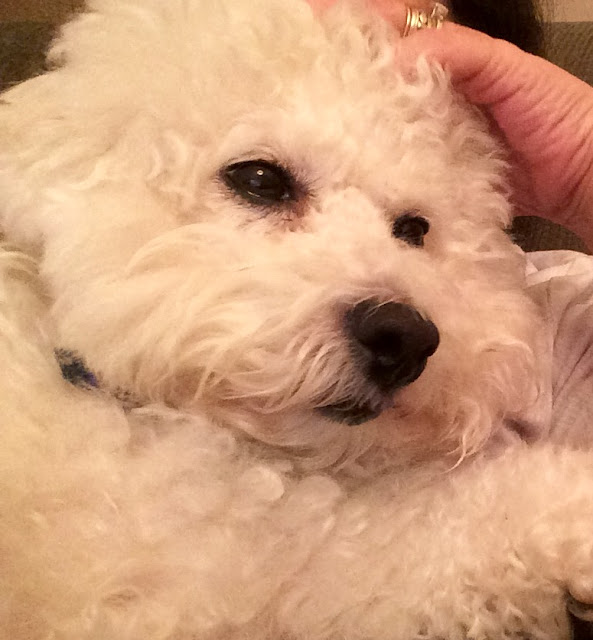 Let me tell you a story. Cos Cos, as I like to call him, is a bit of a handful.
He is a crazy boy full of energy and  much like champagne, while his exuberance is fun most of the time, sometimes, he is like a bottle that has been shaken up a bit too much and popping that cork guarantees a mess.

The day after Cos Cos came to live with us, he was on the bed. Momma went up to him and offered him a belly rub. And with the verbal offer, she placed her hand on his side to have him turn over.  As she touched him, Cos Cos jumped out of his skin, bark growled at her and jumped back all at once.  Daddy had to intervene and after he calming Cos Cos down, daddy had to change Cos Cos' belly band as it was a bit wet.  Momma reacted by jumping out of her skin, pulled her hand back, yelped "no" and jumped backwards as well.  She retreated to the back of her closet in shock, mortified. It was a sight.  Nobody changed her belly band that I know of.   I think she did that on her own.   We all watched horrified and decided that Cos Cos was cray cray because... who is sane and turns down a momma patented two handed full 10 digit belly rub??? Did he even know that it starts at the head with a neck scratch and ear mush and goes all the way to your tail???

Of course while  we are talking about momma we must admit that she is cray cray as well. After she composed herself and got into fresh pjs, she declared that this would not stand. She looked at Cos Cos who was now hiding his face into a pillow, and proclaimed that he was her new "project".

Little did we realize what that meant.  But over the next few weeks she would approach Cos Cos and offer up belly rubs.  And when he would feign disinterest, she was not above showing him what he was missing. One of us would be the recipient of an unsolicited full belly rub and Cos Cos would watch.

Ok, I will confess now. This process was wonderful for us. JD, Wendy and I talked about it. None of us wanted it to end. Sooooo we came up with a plan.  I supposed  we should be ashamed for what we did.  But, alas, we are dogs and shame is a learned human emotion and one I find to be useless, so personally I do not practice it. [Don't saddle me with your hang ups!] Anyway, we told Cos Cos that momma ate bellies and that the massage was a tenderizing process. We told him to be weary and watch out.

It helped that momma would occasionally say things like " You look good enough to eat".  " Gimme some belly, I am hungry for a belly!"
For months, Cos Cos lived on that edge of fear and joy.  The occasional belly rub he surrendered to would leave him wondering if his belly was getting tender enough to eat.  And the next time she would approach him, he refused the belly rub ... out of fear... with many regrets.

And then it happened. We really were not privy to how or when. But apparently momma and Cos Cos had a heart to heart talk. Somehow he knows she does not eat bellies, and the boy is now completely trusting of her to the point of embarrassment. If he is on the bed and she walks by, he turn sunny side up and waits for... a full belly rub.

Shameless. He jumps on her lap and asks for belly rubs. He even falls asleep during a belly rub.

Monday we were at Mr Myke getting groomed and I overheard Cos Cos telling another dog that he lets us believe that momma eats bellies so he can hoard belly rubs. He was chuckling and winking. Proud as punch even. I took a deep breath, rolled my eyes, long deep blink... and told JD and Wendy... "Dang, boy thinks he is player... he thinks is playing us. This cannot stand. He is now MY new project!"

Thank goodness cause a belly eater is not good
Lily & Edward

Personally I luv belly rubs. Especially first thing in the morning when the mama is waking me up.