JD has been broken for about a week or so. Apparently he did something to his back which caused him to have big pain. Big enough that he would bark loudly at momma to make it stop. This would set off a whole chain reaction of unpleasant events. Momma would jump up and run for medication, which JD would desperately try (and often succeed) to spit out. More bark-screaming would follow, momma would try comforting JD who did not want comforting, all he wanted was for the pain to stop. After the cycle played out momma would end up in tears, JD would end up asleep (meds finally would kick in). By then, momma would be emotionally fried and unable to sleep. Dr K witnessed one of JD's episodes and he said he had never seen anything like it in 34 yrs of practice. I am not shocked. That boy is a major drama queen king. Anyway, the real victims in all of this, have been the Wendy and myself. No walks, no blitzing around JD, no adventures at the beach...blah blah all because his highness had something wrong. They even took pictures of JD's insides. Ick. His insides are black and white and "transparent" and the pictures were life-size...so, huge... I am absolutely sure that if they took pics of my insides, they would see pink, lilac and sparkly, not gray and black.

I digress. The last six days have been unpleasant. Momma's frustration made her irritable. Keep in mind that she is still broken and she is still dipping into the pill box five times a day. Apparently her virus feeds on stress. You know, I think I saw something like that on Star Trek... Anyway with everything that is going on here, I pictured momma's virus to look like Jabba the Hutt and saying: "There will be no bargain, woman. I shall enjoy watching you die." of course we were all worried. There was talk about taking JD to NC for some sort of look see at a veterinary school... There was talk about surgical options... burr. But auntie Janet gave momma a name and told her to take JD there. Yesterday, momma and JD went. We were left at home. ( can you say....grateful?) to make a long story short, that tyrant came back all perky. I have no idea what was done, but yesterday afternoon... momma took a 3 hour nap and JD took a 4 hour nap... last night we went to bed at 10 [I know...the excitement is killing me...] and... nobody woke up until this morning. Can you believe it? And they all woke up with smiles and breakfast did not involve tears.  Wow. In fact, Mr. JD hopped on his  chair on his own! 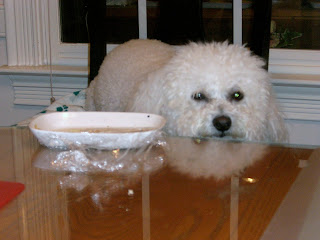 All I can say is, momma needs to find a human vet , doctor, that's it a doctor that can do for her what the vet did for JD.  Oh and JD... this morning ran outside. Yea, ran.  Mr. carry me, ran like a maniac, tail up and did a whole yard tour. Something he has not done in more than a week.  Momma said that if nothing changes, we are going for a walk!  Yippeeeeeeee. I have been wanting a walk for ever and one day.

I do have to say, we all know momma to be a hard core disbeliever. The woman just has a very hard time extending faith in anything or anyone. This event might have changed that. Ohhhhh I just heard her talking to daddy... JD's vet gave her a couple of names of doctors who can do the same type of medicine on her.... YESSSSSSS... go momma, just go.  What have you got to lose? Personally I think I should go see JD's new vet and get myself an adjustment. Maybe my tail would finally be in focus.

Well, I am going to look over the news, and get ready for my walk!!!!

Glad you are feeling better little one
Benny & Lily