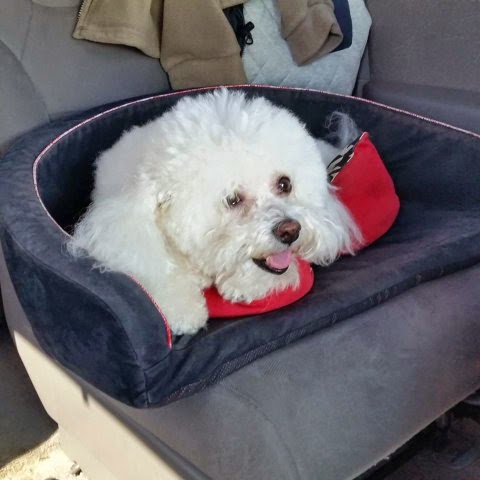 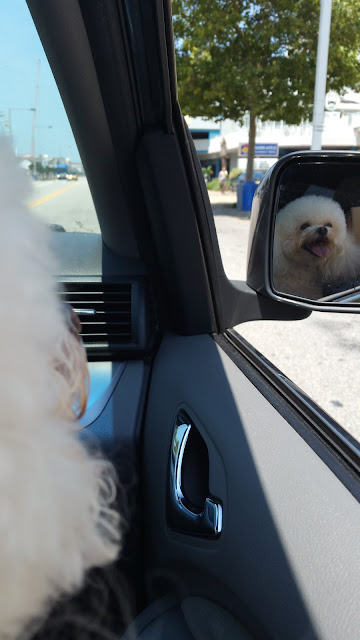 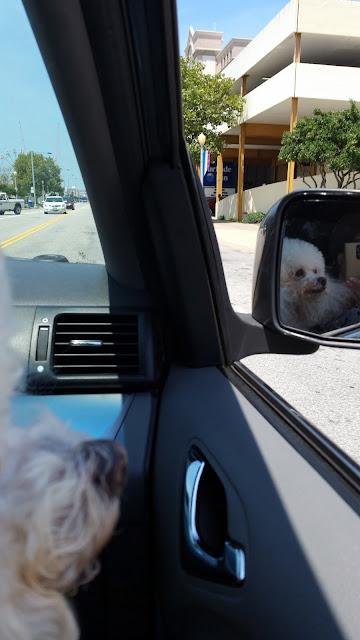 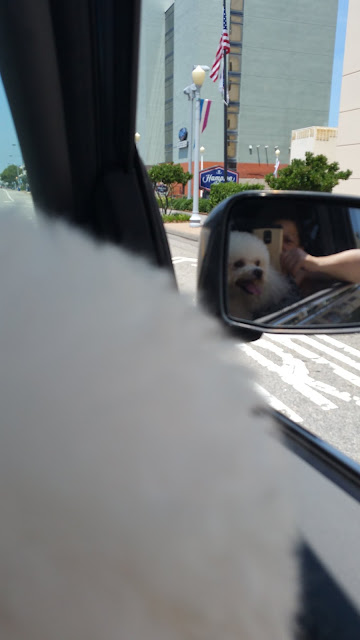 You know your pawrents have lost it when they almost forget to Sunday cruise. I mean, really!

I view this as a necessity. I need to do the oceanfront, the boardwalk, the beach and I need to see and be seen!

It is one of the perks of living in Tidewater and I am NOT giving it up. So, Sunday when I realized that the momma was lost in baking translation and daddy was "MIA" in errand land, I had to do some fast reality checking with them.

I gathered my four leggeds by the back door. We sat there in protest. Long faces, the silence punctuated by JD's occasional annoyed growl.  You know the growl.  The one that coveys that
a. he is not happy.
b. his needs are NOT being met.
c. someone needs to do something immediately because after all... he is the KING.

It took the hoomans a couple of minutes because that is how far out of touch with reality they are these days. Momma's OCD brain is on overload, I personally think she has had it with construction and dust and noise, and messes. Daddy is just daddy. he is normally not as tuned in as momma. BUT.. Ultimately, she got it!  It is Sunday!  She was ready to roll in no time. And obviously we were ready.

The lure of the Sunday ride lies in the smells and sights of the oceanfront.  Sure, the wahini hoomans are interesting. After all out of towners smell differently. But for me, it is the smells and sounds of the ocean and the boardwalk sites that are paramount. Hawaiian ice scents mixed with salt water, pizza, sand, crabs, algae, shish kabob, sea shells, lattes, hot dogs and hot pretzels, and suntan oils, and overcooked sun worshipers wearing outfits that have never been in front of a mirror. It is just a cacophony of everything that is quintessentially summer. It's like walking into a live tableau.

For JD it is all about getting pretty girls to pet him and fawn over him and be admired.  As we like to say... He loves getting a little "strange".

For the Wendy is all about the excitement of the moment. She pulls in a thousand directions and squeals with delight at everything while her tail wags like it has a new motor. And she will occasionally allow a petter or two.  But for her, it is a glorious walk.

We were all kind of curious to see how Cosmo would do.  Momma bet he would bark his head off at everything as he does at home...Daddy bet it would be a short walk because Cosmo would make it difficult. WRONG WRONG WRONG WRONG!  Did you all think I would allow that boy to get out of line and ruin our Sunday???  Are you nuts?  Talks had been had and deals had been worked out before the sit-in by the garage door was organized. Cosmo had been schooled by all of us as how to act and what to expect, so, there. He was wonderful.  He loved it and showed us what a fab dog he really is. He smiled, he listened, he was polite and well mannered.  We are only shocked there was any air left at the boardwalk because Cosmo boy took the biggest and longest and deepest sniffs I have ever seen anyone take, He INHALED the whole boardwalk over and over and LOVED IT.
And both he and JD rode on Atlantic Avenue sniffing up a storm and taking the sites in. Moi?  Honey I am the goodwill ambassador of Tidewater VA. The mere site of me makes people smile, As they should. 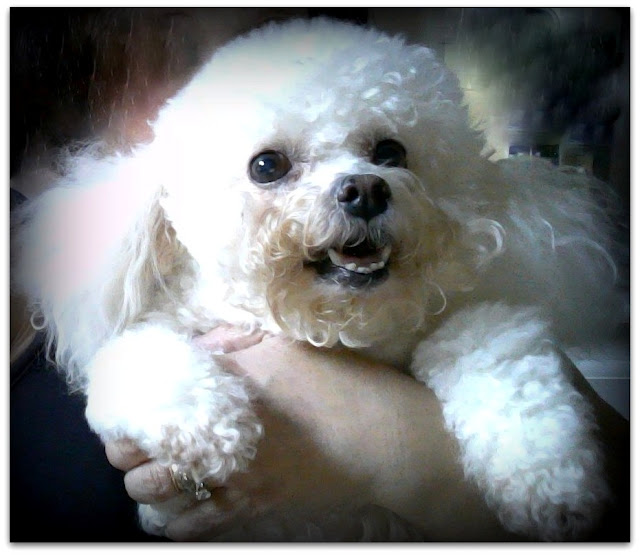 Momma, next Sunday, we get breakfast and then WE RIDE!!!!!

I think a pup like you needs a fancy convertible for cruising! Enjoy the ride!

Now I'm not a car-riding sort of kitty myself but boy-oh-boy, it sure does look like YOU were having fun. Maybe this is something I should learn to enjoy myself. What do you think?

That looks like a fun time! I bet all of the smells out there are wonderful, especially for a doggy. You are adorable btw!

Wow it sounds like you had a great time cruising!! That is so cool that your momma takes you on Sunday cruises!! Have a great week :)